NIGERIAN LEADERS LEARN FROM HISTORY – POWER BELONGS TO THE PEOPLE

The people standing with President Buhari will eventually bring an end to his reign and destroy the modicum of reputation he has left.
The People who stand with you and sing your Praises simply to earn Bread will scurry to the next Bakery when your Dough runs out.
His allies, cronies, loyalists and rented activists have decimated his political capital and goodwill to a point where he only stands a 60/40 chance of winning if he shows up for the 2019 Presidential Elections as an intending Candidate – with 40% been the probability value.
We told President Jonathan. His covetuous Ministers and Aides kept chanting “Nothing dey happen”. They shielded him from people who were closer to the masses and had seen the groundswell of opposition against him.
I am sad he lost but perhaps it’s a veritable learning point for Leaders – that the power still remains with the People.
In 2015, Nigerians didn’t vote for Buhari, the simply voted against Jonathan.
I’m up for a respectful, issue based debate without vitriol or bitterness about that.
I hope President Buhari learns from History.
The Overall Concept of Democracy upholds the fundamental rights of freedom of expression, association and movement.
The Instruments of the State should not be used to intimidate and terrorise Tax paying Citizens who want a Peaceful Protest.
If I were the President, I would ask to listen to Tuface and other Nigerians and make notes of their grievances. Some things may never happen if our Leaders learn Dialogue.
I wouldn’t let “never-do-wells” whose votes count for nothing stage a Counter Protest against the Citizens without whom I would never be President.
The worst misfortune that can befall any Leader at any level is to lack sincere people who can lay the truth bare before them everytime. 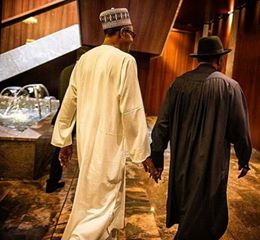 Somebody seems to be on his way out of Office.