This one is for the Men who slow down, beat down and put down their wives letting them do anything but fulfil their God given Potential.

This one is for the Women who are giving up their dreams, living the lie that Marriage is over and above everything therefore it’s a Sin for a Woman to remain ambitious when she has a Man and Children to look after.

Philip May has just become the most important and the most respected in the United Kingdom right now, just by daring to be different and allowing Greatness happen to him by “letting his Wife go”.

He’d been wearing Suits many years before now and I’m sure this much talked about Navy Blue Suit is not even a new one plus I don’t even see anything spectacular about it but then, he’s the HUSBAND of the 2nd Female British Prime Minister in History, Theresa May. 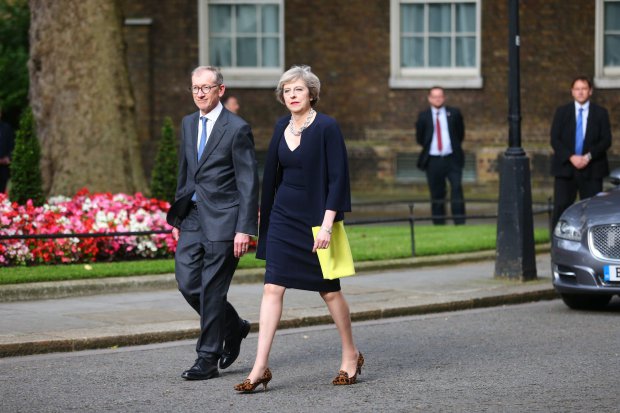 New Prime Minister Theresa May arrives with her husband Philip at Downing Street, London. July 13, 2016. May takes over the reins of the Government after David Cameron resigned, following his failure to get the public backing in the EU referendum.

Let go off anything that makes you Stop including a Man who needs to keep you beneath him to feel Validated or Powerful.

You can be Married. You can become No. 1. You can have it all.

There’s one thing you have they’re craving and dieing to have as well. Be easy on yourself. Don’t settle.

Here’s a Shout out to my Amazing Husband, Obakorede mi Akanni – the Annointed Partner of my Destiny – One who’s so grounded in his idea of Himself, my tall dreams don’t give him Chills. He lets me be.

And if I show him this Article on Theresa May’s husband now, he’ll say –

“that’s my Kind of guy. I’m not here to compete with or steal your shine. I’ll come out and wave the crowd with you when there’s need and then return to the background and do my own work peacefully. You were made for the Stars and even I can’t stop your brightness”. – Korede Ogunsiji

All you intimidated Men, read this article over a glass of Cold Water. Life isn’t so hard. Let this Sink.