After what was known to be a hard fought election among candidates from China, India, Nigeria and few other Countries which even culminated into a Run Off, last week, Toyosi Akerele-Ogunsiji was declared the Vice President, International Students’ Affairs of the Harvard University John F. Kennedy School Students’ Government.

In a Chat with the vibrant Social Entrepreneur who is currently a Mason Fellow and Candidate in the 2017 Class of the Mid-Career Master in Public Administration Program at Harvard, Toyosi was quoted to have said “with a 64% Win, I must now work selflessly in dedicated service for these Votes that I earned. I am profoundly grateful to my super amazing MC/MPA classmates and fellow HKS Students in other classes who voted for me in the 2 Elections. I do not take your Trust and Solidarity for granted at all. My Fellow Contestants in the Elections are some of the most eminently qualified and experienced people I have ever met. We should all work assiduously in unison to bequeath a legacy of hope to the future generations of International students who will attend HKS. An election is mere formality. We’re all stars. All 5 of us. With Harvard being ranked No. 1 in the World and HKS in particular holding together over 1000 Students from about 100 Countries, majority of whom are from outside the United States, I pray for the wisdom, strength, humility and courage to start and finish strong on this assignment. I will spend most of this week thanking my Campaign Dream Team & Friends who made it all happen.” 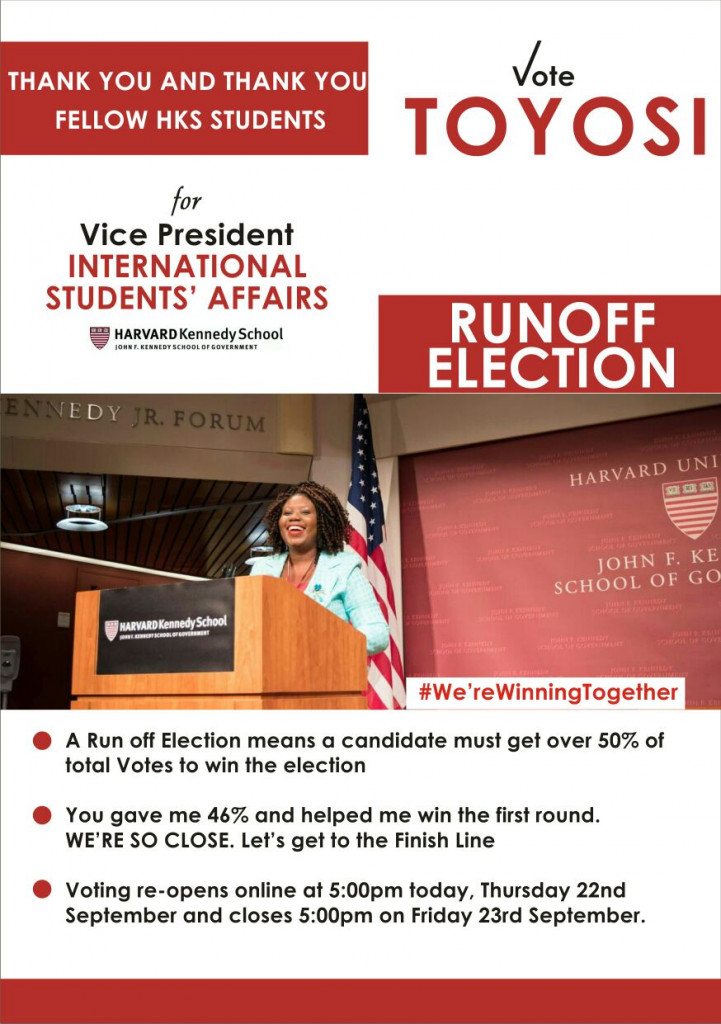 She also shared her Agenda for the students stating that she would focus on identifying creative methods of accessing more Funding and Scholarship Opportunities for Foreign Students, organize the Harvard Wide Food, Fashion and Music International Festival, create a student to student Peer Mentoring framework that helps students from different regions learn more about the power, potential and possibilities available in their various countries and continents and advocate for and seek possible means of amending and improving the School Course Content in a way that keeps the contextual issues of various regions of the world in focus and addresses relevant current issues relating to the International System.

Toyosi, an Alumni of the US Government International Visitor Leadership Program who was listed as one of the Top 20 Young Power Women in Africa by Forbes had a strong Campaign Advisory and Strategy Team for the election which included Herbie Ziskend, a White House Aide and former Chief of Staff to Arianna Huffington of the famed Huffington post, Ming Fan, the Chief Editor of China Central Television, Piyush Tewari, an Indian Social Entrepreneur whose efforts compelled the Indian Parliament to recently pass a humanitarian law to reduce road deaths and Meredith Segal, an Education Expert who initiated the largest Student led Political Campaign and became Co-chair for Obama for America is definitely an iconic Young Nigerian to watch in the evolving space for Young people in Nigeria’s Political Leadership.

In this season of despair where many Nigerian citizens are hanging on hope debating whether there is anything worth celebrating about Nigeria’s Independence, the Country may yet need to seek out its brightest young stars and position them for Leadership, Responsibility and Impact within Public Service and Toyosi Akerele-Ogunsiji definitely has a good head on her shoulder.