Few Weeks ago, I wrote about Rethinking Nigeria’s Military Reforms. Today, I am heartbroken to hear that the middle aged Husband of my dear Friend and former Classmate at the School of Media and Communication of Pan African University, Ufuoma Joe Umusu was killed by Boko Haram Terrorists 3days ago. This letter below written to Nigeria’s President Buhari by the slain Soldier’s younger Brother highlights everything that is wrong with our Country. Such an Emotion laden but Courage Filled Piece.
I am so irately disappointed. 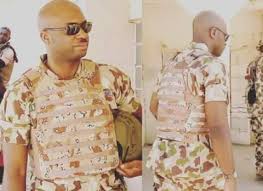 Your Excellency,
My name is Odiriviroro Umusu I am the immediate junior brother of one of your officers Lieutenant Colonel Otobrise Umusu the Commanding Officer, 118 Task Force Battalion in Borno State, who was killed by an Improvised Explosive Device, IED, in an ambush on Monday 12th December 2016 on his way to Baga.
Lieutenant Colonel Otobrise Umusu dedicated his life to serving Nigeria from an early age:
• 1991 – 1996 – Nigeria Military School – Zaria
• 1996 – 1997 – Soldier serving with the Nigerian Army Intelligence Corps
• 1997 – 2002 – Nigerian Defence Academy – Kaduna
• Commissioned an officer in Infantry Corps 2002
• Served as an officer from 2002 – 2016 in:
o Takum in the North East of Nigeria
o Republic of Sierra Leone
o Ibadan
o The Niger Delta
o Army Head Quarters – Abuja
o Maiduguri – where he died in service to Nigeria, his country
Your Excellency; if you are reading this, the name UMUSU will ring a bell as my father Brigadier General Sylvester Ugege Umusu served under you and also worked with you when you headed PTF. It is now Wednesday 14th December 2016 and as I write this letter with tears in eyes, my father, my brother’s wife Ufuoma Joe Umusu and his siblings have not been contacted by you, your office, the Chief of Defence Staff or the Chief of Army Staff to offer your condolences for our loss. My brave brother sacrificed his life and future with his family to make yours and every Nigerian’s today safe. In my humble opinion we deserve your acknowledgement and appreciation and as a former army officer I know you appreciate the sacrifice involved in serving your country and it saddens me that in over 24 hours after the passing of my brother a call has not been made to my family. I do not under any circumstances believe this is too much to ask; for the falling heroes of our beloved country Nigeria.
My family has served Nigeria in her armed forces and continues to do so, we have paid the greatest price for that service; the very young life of my beloved brother Lieutenant Colonel Otobrise Umusu who was killed in action. As his family we have lots of questions to ask surrounding his death:
• When will an investigation be carried out?
• Will there be an investigation?
• My brother bled out, why did his team not have the right equipment for such eventuality
• What lessons can be learnt from this?
• What is being done to stop funding to Boko Haram?
o Every weapon, vehicle purchase or general equipment purchase by Boko Haram must leave a paper trail
o Can the expert forensic accounting skills used by the EFCC not be employed to disrupt their operations?
Your Excellency, you may deem this letter as disrespectful and not the right procedure in dealing with this matter but am all but a Nigerian citizen that is grieving the loss of his beloved brother and in my humble opinion we deserve to know the who, what and why that happened to our brother on that terrible day and as his Command in Chief you are ultimately responsible for reaching out to all the families of our fallen heroes to assure them their loved ones did not die in vain.
Thank you for your anticipated attention to this matter.
Yours sincerely,
Odiriviroro Umusu.
I hope we don’t sweep this under the carpet yet again.
I’m so sorry Ufuoma. This is a sad loss.